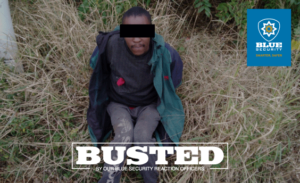 A fence-hopping suspect, wanted for a series of housebreakings in the neighbourhood, was tracked down and apprehended by a Blue Security reaction officer on Sunday morning in Ridge Road, Umhlanga.

“The incident occurred when various units responded to a callout at about 10.30am after a trespasser was spotted on the rear boundary wall of a home bordering the M4 in Umhlanga,” said Blue Security community and media liaison officer, Andreas Mathios. “When the suspect heard the panic alarm being activated he jumped into the neighbouring property. The neighbour reported that he had not seen the trespasser,” Mathios said.

“Blue Security units continued to actively search the bush alongside the M4, which runs behind the properties. Whilst doing so they then heard two shots being fired,” he said. “Further investigations revealed that the neighbour two doors down from the initial incident in Ridge Road had seen the fence-hopper on his roof and fired two warning shots which caused the suspect to disappear again,” he said.

“A second search along the M4 behind this property proved more successful and the trespassing suspect was flushed out from his hiding place in the bush by a Blue Security reaction officer,” he said. “The suspect was identified from CCTV footage as being linked to a housebreaking case at a nearby home on Thursday, 13 August. All three neighbours involved also positively identified the suspect as being involved in Sunday’s fence-and-roofhopping incident,” he said. “The suspect was handed over to members of Durban North SAPS for further processing,” he said.

In a separate incident a shoplifter was caught redhanded with stolen clothing to the value of R400 on his person in Amanzimtoti on Saturday. “The suspect was observed entering the clothing store with an empty shopping packet,” Mathios said. “When his bag was searched, on leaving the store, two pairs of jeans were found that had not been paid for,” Mathios said. “The suspect was arrested by the security guard on duty and handed over to members of Amanzimtoti SAPS for further processing,” he said.

A housebreaking suspect was tracked down, after a large-scale manhunt through the Gillitts area on Wednesday morning, and an arrest was made. “Blue Security’s Community Crime Prevention Unit and armed response officers scrambled into action .... 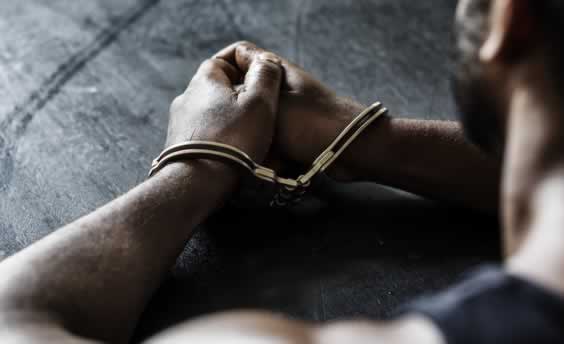