More than 5 cars are stolen in the Durban Central, Berea and Umbilo areas every day.

The South African Police Service’s (SAPS) most recent crime stats revealed Durban Central as the new car theft capital of South Africa. With a startling 765 cases, the station saw a 19% increase in theft of a motor vehicle or motorcycle during the 2018/2019 period. Not far behind, Berea is fourth on the list with a 14.8% increase and Umbilo is fifth with an 8.7% increase in the theft of motor vehicles or motorcycles. 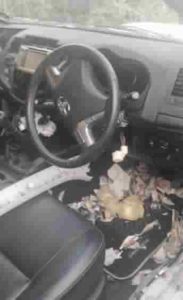 Our Tactical teams provided us with some insight into the upward trend of motor vehicle theft based on their own experiences in the field. Russell Lawson, our Highway Tactical community ambassador, noted that vehicle thefts and hijackings tend to pick up on Wednesday and increase as Friday approaches.

Lawson recommends installing not just one but two tracking devices in your vehicle, in case they find the first one. This is important in cases of hijackings where the driver or passengers are taken, hostage. The photo alongside shows what a vehicle looks like when car thieves are looking for a tracker.

Our Durban North Tactical ambassador, Darryl Moodley, shared some statistics on the Durban North and Umhlanga area. For the month of October, a total of 21 vehicles were stolen between the hours of 8:00 am and 16:00 daily. High-risk areas include mall parking lots and roadside parking bays and the most commonly stolen vehicles are the Toyota Hilux and the Ford Ranger.

Vehicle theft is difficult to curb as the criminals are in and out very quickly. Remote jamming is still a common method used and thieves also bring their own computer boxes and keys to start the vehicle. Our Tactical Ambassadors advise that you don’t leave any valuables in your car and to park in well-lit areas as poor lighting has an impact on vehicle theft.