Blue prevails as undisputed leader in security at PMR Awards 2019 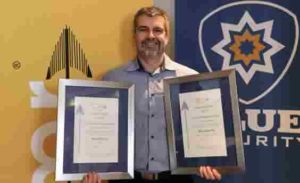 Blue Security has clinched the top spot as the undisputed leader in the security sector in the PMR Awards 2019.

The firm has upheld its winning streak, scooping the Diamond Arrow award for service excellence for 11 years in a row, and again winning the award for being the company doing the most to fight crime in KwaZulu-Natal over the past year.

Blue Security CEO Henk Van Bemmelen said the company’s success stemmed from an ethos of commitment to customer service excellence and his team’s dedication to professionalism and building strong partnerships with communities in the greater Durban area. “We are so grateful for the strong relationships we have built up with our clients over the years and we are humbled that they have continued to show their confidence in us by choosing to vote for us as their top security service provider once again,” Van Bemmelen said.

The PMR Awards ceremony is the culmination of an independent research process that rates companies and institutions on their competitiveness, effectiveness, excellence, competence, resilience and leadership. The rating is based on the perceptions of independent respondents who nominate and rate firms for the awards, with a strong focus on evaluating customer service and satisfaction. The Diamond Arrow award, which recognises a firm as the undisputed leader in its field, is the highest accolade a firm can attain.

Van Bemmelen said the firm’s ongoing success as an undisputed leader in the security sector was the result of the hard work and dedication of every team member from armed response officers and control centre staff to technical, sales and administrative personnel. He said the strategic use of technology in the fight against crime had also ensured that the firm remained on the cutting edge of the world’s best innovations in the latest security systems.

“We believe in being proactive rather than reactive. We want to help prevent crime from happening in the first place. Through this approach we have achieved many successes in the fight against crime over the past year through the commitment of our highly professional team, our investment into technology, and our partnerships with dedicated neighbourhood watch groups who work closely with us on the ground,” Van Bemmelen said.

“We have also invested in high-tech crime prevention security systems, including automated number plate recognition (ANPR) cameras in areas such as Amanzimtoti, Kloof, Moseley, Umhlanga and Waterfall, and introduced specialised smart home security systems. Our ANPR cameras have led to arrests of wanted suspects and the recovery of stolen vehicles,” Van Bemmelen said.

“We also believe it’s important to get whole communities, from domestic staff to retirees, involved in the fight against crime. We are active in our local communities, creating awareness about crime and security and alerting people to criminals’ latest modus operandi,” Van Bemmelen said. “Everyone can contribute to keeping our communities safer from reporting a suspicious person or vehicle on a WhatsApp group so that patrollers can respond, to alerting us to a crime in progress on a neighbour’s property. We have effected numerous arrests and recovered many stolen goods thanks to the role residents and neighbourhood watch groups have played as part of our team.”

Winning the award for the 11th year in a row was an achievement that the company’s entire staff and community partners could be proud of, Van Bemmelen said, as its successes hinged on the team’s professionalism and integrity in its strategic partnerships. “We would like to thank all our customers for their strong vote of confidence in holding us in such high esteem and letting us walk off with this prestigious award once again,” he said. 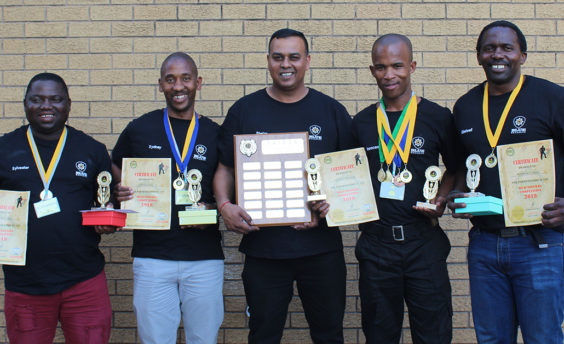 We are super proud to announce that our team ranked top out of the represented reaction officers across South Africa, placing first out of the 16 teams, at Reaction Man 2019. The annual SAIDSA (South ....