Staff members responsible for opening and closing their company’s premises every day need to be extra vigilant when doing so, in order to minimize the possibility of being targeted by criminals. This cautionary advisory comes after an increase in business robberies has been observed in the greater Durban area recently.

“Taking every precaution while unlocking and locking the company premises is vital to avoid becoming a crime statistic,” said Blue Security community and media liaison officer, Andreas Mathios. “A prominent factor of most of the business robberies which have occurred is the time of the incident. In most cases it is either close to, or at, opening and closing time,” he said.

In one of two incidents this week a business owner was held up at gunpoint while opening her Springfield Park premises just after 7am on Thursday. “Two suspects approached the owner and accompanying security guard, produced a screwdriver and firearm and forced them into the premises,” he said. “They fled with computers, computer screens, laptops and a cash box containing an unconfirmed amount of cash,” he said. The case is under investigation.

On Wednesday five armed suspects held up a guard at a lodge in Parlock, broke into the accommodation and fled with four flatscreen TVs. “The suspects fled in an awaiting getaway vehicle. Newlands East SAPS attended the scene and investigations are continuing,” he said.

In another recent business robbery in Mayville six armed suspects held up a guard and broke into the premises at 5.30am. “The armed gang ransacked the offices before making their getaway in an awaiting luxury vehicle. A number of computers were stolen in this incident,” he said.

“Criminal elements intent on entering and robbing a business of cash, computers and other valuables have, in the majority of cases, staked out the premises days before making their move,” Mathios said. “Staff should be aware of individuals loitering outside, suspicious vehicles that may be frequently seen in the area or unfamiliar customers who arrive shortly before close of business,” he said.

“When opening for business in the morning be sure to be accompanied by a colleague as back-up or request the security provider to be nearby when doing so,” he said. “Be sure to lock the door after entering the business and keep it locked until ready to admit customers. If practical, keep the entrances locked at all times and install a remote unlocking device to activate when admitting visitors,” he said. “When arming/disarming alarms have a procedure in place to alert the security provider in the event of a threat to employees or the premises,” he said.

Other business armed robbery precautions include:

• Thoroughly check the premises at close of business to ensure no-one is hiding in the toilets or store rooms
• Ensure that all valuables are securely locked away
• Install good lighting around the exterior of the premises – not just the front of the property
• Check that CCTV cameras are activated to alert of suspicious movement on the premises
• If vendors, customers or deliveries are scheduled for after hours check for authorization and identity confirmation. 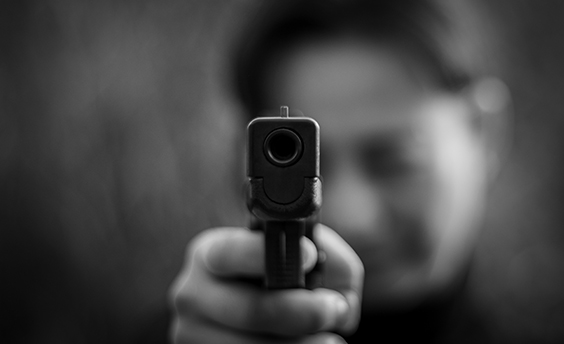 Customers and staff members were fortunate to escape harm during an armed robbery at a Bellair shop on Tuesday evening. “Blue Security armed-response officers reacted to a call-out to discover that two suspects had entered .... 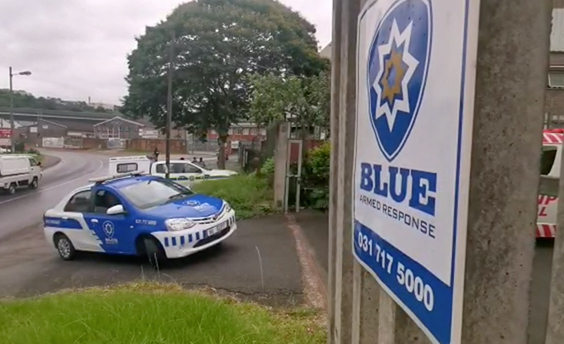 A Westmead, Pinetown business owner sustained a head injury after being stabbed by assailants during an attempted armed robbery on Friday morning. “Blue Security control room despatched a response unit after being alerted to the ....