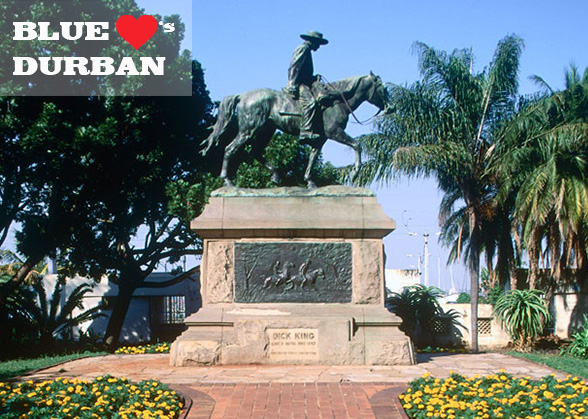 The Ride of the Peacemaker Dick King.
One of 13 children born in England, Dick King came to South Africa as part of the 1820 settlers.
At the young age of 15 he worked as a wagon driver, little did he know how this would prepare him for the ride that became legendary.
It began on a bitterly cold winters night on the 24th of May 1842. “Mlamulankunzi” meaning The Peacemaker, who we now know as Dick King, and his trusted travel companion Ndongeni, as well as his horse Somerset, embarked on a treacherous 950 km ride. This was not a ride in the name of fame or glory, it was a ride for help.
This epic 10-day ride from Durban to Grahamstown took them deep into the wilderness, crossing 120 rivers and covering 125 kilometres a day, was to get help for the British Garrison who were being besieged in their camp on the site where the Old Fort stands today.
After Dick King’s message was heard and he returned with relief parties, just in time to save Port Natal, both King and his companion Ndongeni, who sadly succumbed to the treacherous terrain, received thanks by way of a portion of land each. Dick King was also paid a handsome sum of fifteen pounds of sterling.
The Dick King Statue is an equestrian monument erected to honour Dick King and his horse Somerset. The beautiful bronze monument was unveiled on 14 August 1915 and is situated on the north of Durban Bay, the Victoria Embankment, also known as the Esplanade, Durban’s main promenade that stretches all around the waterfront offering wonderful views of the harbour.
The Statue was brilliantly sculpted capturing the exhaustion Dick King must have felt considering the distance he travelled on horseback to Grahamstown.
This epic journey became an important piece of Durban’s history.
Have you passed any monuments or interesting landmarks in Durban recently and want to know more about it? Send in your suggestions to learn more about our heritage-rich city.